Do you plan on scraping LinkedIn? Then you need to come in now and read our article on LinkedIn scraping and the best LinkedIn scrapers in the market – written by expert scrapers to save you unnecessary waste of time, money, and energy.

Have you ever thought of the amount of data publicly available on LinkedIn? If you haven’t, I have and to tell you the truth, LinkedIn holds some huge amount of precious data that is of interest to both businesses and researchers. LinkedIn is the social networking site for professionals and businesses. You cannot only find profile information of companies and businesses, but you can also lay your hands on the profile details of their employees. LinkedIn is also a huge platform for job posting and hosting – and a lot of jobs related data can be found freely. Companies and business professionals profiles and their associated generated contents are some of the data of interest.

However, that people are interested in the publicly available data does not mean they can get it easily. LinkedIn does not provide a very comprehensive API that allows data analysts to get access to the data they require. If you must access any data in large quantities, the only free option available to you is to scrape LinkedIn web pages using automation bots known as LinkedIn Scraper. But does LinkedIn supports the use of automation bots and even web scraping in general? How easy is it trying to scrape publicly available data on LinkedIn and what are the best LinkedIn scrapers out there? These and many more will be discussed below.

If you had ever think LinkedIn is an easy nut to crack when it comes to scraping then you’re living in your own paradise. Make no mistake about it, LinkedIn is probably the most difficult website to scrape and they go to a great length to discourage scraping including putting in place smart and strict anti-bot systems in place to discourage scraping – as well as a legal department in place to use the law against you. LinkedIn has suffered a great deal of scraping and they want to put a stop to it. The lawsuit initiated against HiQ by LinkedIn is one of the most popular anti-scraping lawsuits in the industry – unfortunately for them, HiQ won the suit.

Even though the case has set a precedence in conjunction with other lawsuits on the legality of web scraping and how the practice is legal depending on some factors, it can still become illegal and as such, it is advisable you contact a lawyer first before scraping. While it is considered legal, it is far from being an ethical practice and the moral aspect of it is also questionable. However, for some business and research reasons, some people will have to overlook the ethical and moral aspects and still get their hands on the data they require. If you are one of such person, then this article is for you.

How to Scrape LinkedIn using Python and Selenium

I stated earlier that Scraping LinkedIn is difficult. Well, let me rephrase it, scraping LinkedIn is extremely hard and even with the slightest mistake, you will be sniffed out and blocked in no time. This is because LinkedIn has a very smart system in place to detect and deny bot traffic. If you know you are not an experienced bot developer, you might as well make use of one of the already-made LinkedIn scrapers discussed below this section. However, if you are ready to take the challenge, then you can give it a try and see how easy/difficult it is to bypass LinkedIn anti-bot checks. 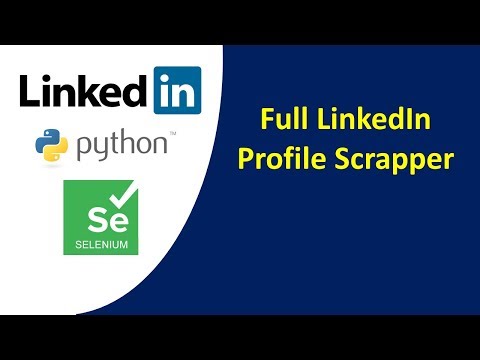 The most important way to evade detection while using a LinkedIn scraper is using proxies – and companies such as HiQ make use of them. Because of the effectiveness of the LinkedIn anti-spam system, residential proxies are the recommended proxies of choice.

Aside from proxies, you also need to mimic how humans surf the Internet else, the system can still deny you access. With these, you are set to access any publicly available data on LinkedIn. Below is a sample code that scrapes job details. It is a very basic script that does not have a lot of required codes for handling exemptions, missing HTML tags, proxies, and appearing natural. It is just a proof of concept.

Best LinkedIn Scrapers in the Market

LinkedIn is quite popular as a source of research data and as such, has got some competing scrapers you can for extracting data from LinkedIn. However, not all of them are worth your time and money and as such, I will only be recommending 5 of the best LinkedIn scrapers out there – that have been tested and trusted.

If you are looking for a web scraper for LinkedIn that has been designed not to fail, then Octoparse should be top on the list. You know why? Because it is arguably one of the best web scrapers in the market and it is perfect for scraping LinkedIn.

With Octoparse, you can convert web pages on LinkedIn into a structured spreadsheet. Octoparse has a good number of features you will want in a web scraper. Some of these include advanced web scraping features such as proxy rotation, scheduled scraping, and a cloud-based platform. Octoparse is a paid tool and good for its pricing.

ScrapeStorm is an intelligent-based scraping tool that you can use for scraping LinkedIn. ScrapeStorm makes use of an automatic data point detection system to identify and scraped the required data.

For data that the automatic identification system does not work for, you can make use of the point and click interface. ScrapeStorm was built by an ex-Google crawler team. It supports multiple data export method and makes the whole process of scraping LinkedIn easy. Before using ScrapeStorm, make sure you set it up in the right way. It is powerful and can help you with enterprise-grade scraping.

Helium Scraper is a desktop app you can use for scraping LinkedIn data. You can scrape anything from user profile data to business profiles, and job posting related data. With Helium Scraper extracting data from LinkedIn becomes easy – thanks to its intuitive interface. Helium Scraper comes with a point and clicks interface that’s meant for training.

ParseHub is also one of the best LinkedIn scrapers in the market now. ParseHub has been designed to enable data analysts to extract data from web pages without writing a single line of code.

ParseHub just like all of the above web scrapers is a visual web scraping tool. Unlike the above, its desktop application comes free but with some limitations that might not be important to you. ParseHub is incredibly flexible and powerful. IP rotation is key in web scraping and when using the desktop application, you have to take care of setting proxies yourself.

Proxycrawl holds a good number of scrapers in their scraping API inventory with a LinkedIn scraper as one of such tools. Unlike the 4 web scrapers above that require no coding skills to use, the LinkedIn Scraper available is meant for use by developers trying to evade dealing with proxy management and Captchas. With this, you can scrape a lot of data from LinkedIn ranging from company’s description and employee data, user profile information, and much more. Using Proxycrawl is as easy as sending an API request.

LinkedIn has proven that it is a hard nut to crack as far as scraping is concerned. In most cases, if you try scraping it by using a simple web scraper, you will get detected and blocked. Unless you know what you are doing, the best option available to you is to use the LinkedIn scrapers developed by experts. 5 of these have been discussed above.