Are you looking forward to making use of proxies on Twitter? Then come in now to read our article on the best proxies to use for Twitter. Learn from experts today and save yourself the headache of losing your accounts now. 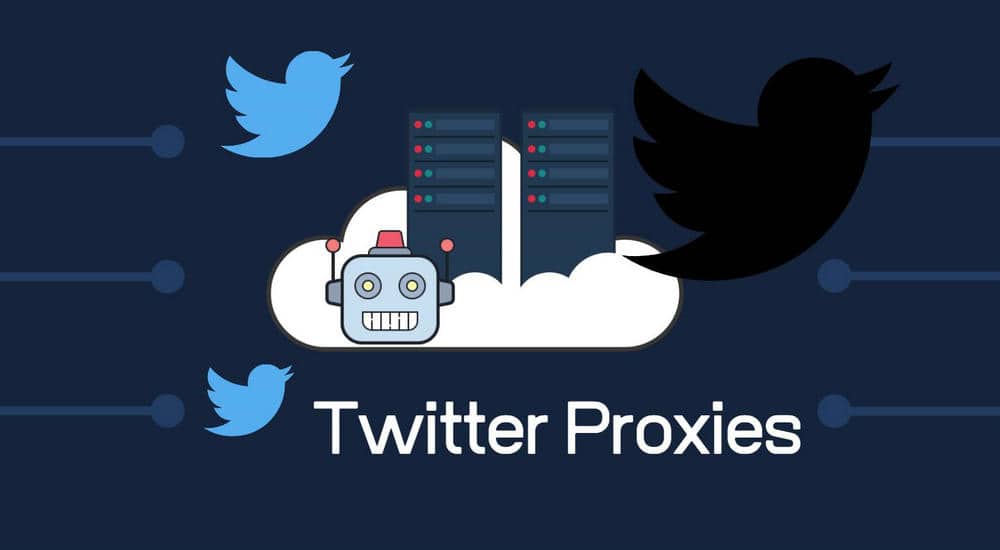 For those that know how to use Twitter, it is a good source of traffic and revenue. As social media marketers, managing all their accounts is difficult, and as such, they resort to automating their actions on Twitter using Twitter Bots. For the bots to function well and keep your accounts safe, you need proxies that work well with Twitter – those proxies are known as Twitter proxies.

Unlike Instagram and Facebook, Twitter is not much of an aggressive bot fighter. In fact, they even have their own public APIs for bots to use. However, that doesn’t mean if you are caught spamming, you won’t be banned.

So when it comes to making a choice regarding the proxies to use, datacenter proxies will easily get the job done. However, for extra security, you can make use of residential proxies. Below are the best proxies for Twitter automation.

Smartproxy is a premium residential service provider. Their proxies are undetected, secure, and reliable, thereby giving you the peace of mind to go on an automation campaign without fear.

Even though their proxies seem pricy just like other premium providers, their minimum monetary requirement is small, making it the perfect choice for those in need of premium service but with a small budget.

They have a large IP pool and provide you the capability of targeting countries or cities. Depending on the proxies you want from them, you can get both sticky IPs or high rotating IPs.

GeoSurf is another residential proxy service initially designed for scraping and crawling the web but has since been adopted into other use cases in which social media automation is part of it. They have got not just country proxies but some city-specific proxies. Their proxies are undetectable and reliable.

However, minimum monetary commitment is on the high side, and this may be a big turn off for a lot of people interested in their service. Their IP pool as per residential proxy providers is decent, and you can expect good customer support should anything go wrong.

Their pricing is on the high side though. If you are looking for a provider with good session control, then Luminati takes the lead. Their proxies are secure, reliable, and ethical. These had earned them a good number of Fortune 500 companies as customers, and read our review about Brightdata Proxies Here.

They are compatible with both HTTP and Socks bots and has a presence worldwide. When using Microleaves, scaling up will not be much of a problem for you.

Proxy-cheap might not be a popular provider to many but believe you me, they are premium providers and have on their customer’s list, some of the world-renowned companies. They are kind of different from the 3 residential proxies discussed above in the aspect of bandwidth and pricing.

While the others are priced based on consumable monthly, proxy-cheap is priced based on only GB but without monthly commitment, and start from $5 per Gb to $3 per Gb, it’s really reasonable pricing! Their residential proxies are some of the best to use for Twitter automation.

As I stated earlier, datacenter proxies do work with Twitter. You can use them with your favorite Twitter automation bot without running into problems provided to stick to the guidelines of Twitter automation. In one of the guidelines, it is recommended that you shouldn’t assign more 3 accounts to a proxy, and if all else fails, avoid using 5 accounts per proxy. Failure to abide by this will ruin your automation game.

MyPrivateProxy is arguably one of the best private proxy providers in the market. Interestingly, we consider MyPrivateProxy as the proxy of choice for Twitter automation. This is because their proxies are cheap, super-fast, and designed not to fail. They make use of enterprise-grade hardware and leverage the skill of some of the best experts in the industry.

Their private proxies can be used for Twitter automation without much hassle, read our in-depth review to MPP proxies. Also interesting is the fact that some of their data centers run on 100 percent renewable energy, which makes them green.

InstantProxies’s private proxies are some of the datacenter proxies you can use for Twitter automation. They are super fast and made not to fail – this is seen in their uptime that has remained consistently over 99 percent. Their uptime is even publicly tracked, which provides you a better understanding of their uptime, and you can test ping before you buy. 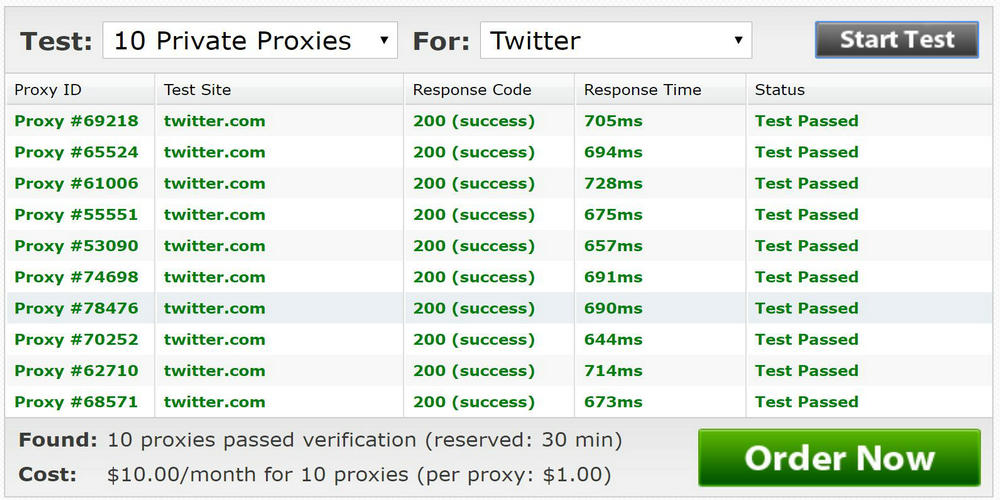 Their proxies come with unlimited bandwidth and no limit to the number of concurrent connections allowed. However, you have to be careful and experiment with the optimal number of proxies as performance decreases with an increase in threads. Their proxies are also the cheapest on the list. 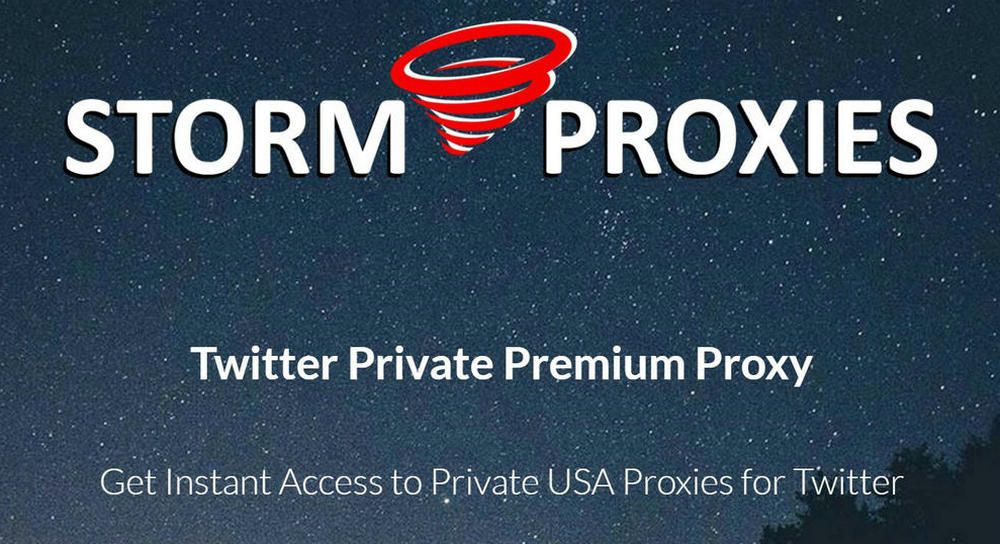 Stormproxies is a popular proxy provider known not only for their provision of backconnect proxies are dedicated proxies but for their specialized proxies for special use cases.

While their general-purpose dedicated private proxies will work for Twitter, to be on a safer side, I will advise you go for their specialized social media proxies, which was specifically made to work with social media automation tools like Jarvee, FollowingLike, Follow liker and Socinator.

Highproxies is also one of the proxy providers you can get datacenter proxies from to use for Twitter. They are kind of limited in terms of location coverage like Stormproxies in the sense that they only have servers in the United States.

However, what they lack in location coverage, they have in performance. Highproxies performs well in terms of speed. Their proxies are also secure and reliable. There are two classes of proxies you can use for Twitter from Highproxies, and their proxies are recommended by jarvee.

Buy Proxies might not have good branding as per their name. However, that does not mean their proxies are not good. In fact, their dedicated proxies are some of the best, and their prices are kind of moderate. Interestingly, the dedicated proxies were engineered and recommended for use on social media sites, with Twitter being one of the bots it works for.

Using their proxies on bots like Jarvee has been proven to work well, provided you do not exceed limits. Aside from dedicated proxies, they also provide semi-dedicated proxies and specialized proxies for sneaker sites and Ticketmaster.

While this article is more focused on using proxies for Twitter automation, I need to discuss a bit about unblocking Twitter. If your access to Twitter has been restricted probably because the region you are does not allow you access to Twitter or because your IP has been blocked by Twitter, there are ways around it. To remove this restriction, simply make use of private proxies (datacenter proxies) or VPN, and access will be granted.

To Unblock Twitter IP restriction, The VPN is the best choice, You can easily use a paid VPN to bypass it, Such as,

Currently, there are many automation bots supporting Twitter automation. Some of the best include TweetAttacksPros, ASB Twitter Bot, and Jarvee. Read our article on Twitter Bots to learn more about them.

No, they do not. However, they are not as strict as other platforms, and that’s why you can afford to make use of datacenter proxies without getting banned.

To be on a safer side, use No more than 3 accounts per proxy when using datacenter proxies. However, if you are on a budget, you can use 5, but just know that 5 accounts per proxy is borderline and might easily get you into problems.

For residential proxies, you do not need to worry as the proxies are rotating and the IP address assigned to you changes after each request or a specific period of time.

Now that you have known the best proxies to use for Twitter, it is time to make a choice. Make your choice based on your budget, what you require, and the unique twist of each of the proxy provider.