Since its launch in September 2016 by its parent company, ByteDance, TikoTok has witnessed a surge in its number of users, and it is arguably one of the most social media apps among teenagers and older people.

TikTok experienced a few drawbacks due to a permanent ban in India in 2020 and in other Asian countries. Before the ban, the Chinese app enjoyed massive popularity in India, with a total number of users amounting to 200 million. India explained that the ban was due to issues that bordered on national security.

Several social media apps designed to perform functions as TikTok seized the opportunity to introduce a short video sharing app since the ban, and each one is jostling to be the top app. The apps have witnessed over 50 million active users in 2022 alone, causing TikTok to lose a potential 250 million users.

Are you a marketer or regular user curious to know the statistics of a Chinese-owned company? Or do you want something to aid your analysis and help you make important decisions? After thorough research and combing the internet, this article seeks to give you what you are looking for. Now, all you have to do is get a cup of coffee to sip while you have fun with the numbers.

1. What is the Total Population of TikTok Users?

The full-fledged video-sharing app has a large user base, which is fast growing in terms of the percentage of the market it has captured since its introduction in 2016. As highlighted in the key statistics, there are over 1.2 billion active TikTok users. This is a huge audience and could guarantee marketers of handsome rewards. The population is expected to soar higher to 1.8 million monthly active users by the end of 2022.

2. What is TikTok Demography?

Knowing that the total population of active TikTok users stands at 1.2 billion is one thing; knowing what age brackets use the app the most help in influencing your decision as a marketer. Recent statistics show that people between the age of 18 to 24 amount to up to 386.6 million, constituting up to 43.7% of the total number of users. These are the most significant users of the age range.

The second-largest age range of TikTok users are people who fall between the ages of 25 – 40, which constitutes the bulk of the millennial generation. These users amount to 282 million, accounting for 31.9% of the total users. The following breakdown explains that the older people get, the lesser they use the social media app.

Statistics show that females use TikTok more than their male counterparts do globally. Female TikTok users constitute 53% of the total population of active TikTok users. This indicates that women love to have fun watching videos on their phones.

The male users take up the rest of 47% of active TikTok users. However, compared to that of female users, the numbers are almost equal to that of the females. In addition, there are different statistics for different countries using TikTok. For instance, 59.7% of TikTok users in the United Kingdom are female, and 49.3% are male.

So, if you are a marketer in the dilemma of what gender to capture for great returns, then you should let these statistics guide you.

3. How Many Times have TikTok App been Downloaded?

According to Hootsuite, this is the third time in a row that TikTok retains the top spot of the most downloaded app. It was downloaded 693 million times in 2019 and 850 times in 2020.

4. What Country has the Highest TikTok Users?

There is a bit of complexity on what country uses TikTok the most. In China, they do not use TikTok, even though the company's parent company resides there. Instead, they use another version of TikTok known as Douyin. Douyin has over 600 million active users on its platform as of 2021.

There were 2 million TikTok users in India before the ban, which was the highest after China’s Douyin. However, right now, amongst countries that use TikTok, the United States stands tallest with 131 million. Indonesia follows with over 92 million.

5. How Many Daily Active Users does TikTok Have?

TikTok boasts over 1.2 billion monthly active users, with a total of 4.2 million active users in America alone. This remarkable feat was achieved in 4.9 years. However, between 2018 and 2020, the platform witnessed a high surge in active users. Well, you can put that on the coming of COVID-19, but no other social platform has attained such a milestone in a short while, not even Facebook.

6. What  Contents do TikTok Users Consume Most?

You might wonder what category TikTok users are interested in. According to a chart on Backlinko, most TikTok users spend their time on entertainment. Garnering a whopping 535 billion hashtag views. Dance, pranks, DIY videos, and others rank behind entertainment in views. By trending a hashtag, you could increase views for other content, but it will take some time to garner views.

It is great to have a handful of information about the platform to make better decisions. For example, now you know entertainment sells more than other content. So, if you want to create ad content, you could introduce a bit of entertainment to spice things up or get good returns.

7. How long does an Average User Spend?

8. What is the Frequency of Daily Opening of the App?

9. How much is TikTok Worth? 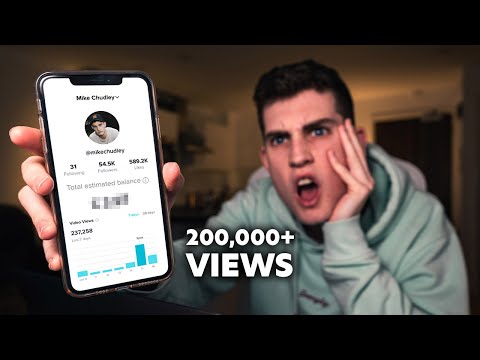 TikTok is still a private company, so it is difficult to determine its worth. However, estimating its value is not difficult. TikTok is said to be valued at $50 billion in 2020. However, experts claim that the figure has increased by 25%, making it stand at a valuation of $75 billion.

The parent company of TikTok, known as ByteDance, is valued at $425 billion in 2021. However, the company's net worth was reported to have dropped by $100 in 2022, making it stand at about $325 billion, according to sources and published deal offers.

10. What is TikTok Growth Rate?

The app witnessed a rise in the growth of its platform in 2020, majorly by Gen Z and Millennials, who make up 80% of the total active users of the app. The development could be linked to the emergence of the Corona Virus Pandemic (COVID-19) when everyone was grounded at home by the Pandemic.

During this time when depression could easily set in, many people turned to their social media platforms to keep life going, which saw the usage of the app surge by 41%. These generations keep using the app on the go, providing TikTok with an opportunity for massive growth, which could be tapped.

TikTok's user base increased by 85.3% in the United States in 2020 compared to the previous year. The growth rate is expected to remain double-digit until 2021, when it is likely to drop to a 5.1% annual user growth rate in 2014.

11. Where Is TikTok Ranked Amongst Other Social Apps?

Here's another twist to this ranking. Recall that Douyin (the Chinese version of TikTok in China), which has over 600k users, is a product of ByteDance, a parent company of TikTok. When both platforms are combined, TikTok will rank fourth place in this chart, pushing Instagram and WeChat behind.

12. How Many Countries is TikTok Available In?

There are currently 195 countries in the world. TikTok has extensive coverage: it is available in 155 countries and supports 75 languages. The rest of the countries where Tiktok is unavailable are either banned or don't operate there.

Interesting facts. Let's picture this: you run a short ad incorporating a form of entertainment to grab users' attention quicker, you would reach a large number of users in different countries; hey, your business is about to leap!

13. How Much do Users Spend on TikTok?

Users' spending has hit $456.7 billion. According to Supply Gem, this growth is more than 250% of the lifetime spending that TikTok witnessed at 1.5 billion downloads. It is reported that most of the revenue TikTok get is from China – its country of origin. The revenue accounts for 72% of TikTok's income; in monetary value, that's $331 million. The United States and Britain take the second and third spots, respectively.

14. What is TikTok's Engagement Rate?

The social app is reported to have the highest engagement rate among all social media platforms. An average account of 1000 followers gets an engagement of over 9%, compared to Instagram, the app that ranks just behind TikTok.

Even though the platform was banned in some Asian countries, it still did not affect the fast-growing social media, as the younger generation—especially in the United States—keeps joining the platform every day to have fun.

Are you a marketer or a business owner looking for the demography of prominent active social media members? Then it would help if you examined the way of TikTok. Numbers do not lie; the information in this article has been well-curated from different sources on the internet to help you make a good decision.