Are you looking forward to scraping Indeed for job listing data? Then come in now and discover the best Indeed scrapers in the market including how to develop yours if you have coding skills.

The Indeed web service is where job seekers all over the world troop to get information about vacancies and of today, it is the number one job site in the market with over 250 million unique users monthly.

The site is not only a hub for job postings; you can also get information about companies and also see CV postings. There are ratings and reviews of jobs and companies and about 10 jobs are added every second. The amount of job data publicly available on the Indeed website is large and if you are interested in job posting data, there is no better place to get your hands on them than on Indeed.

However, Indeed would not hand you over the data publicly available on its website. If you are interested in collecting the publicly available job data on Indeed, you will have to get it down yourself. And as you already know, manual data collection from websites can be time-consuming, tiring, repetitive, and error-prone.

That is why marketers and researchers interested in extracting data from Indeed make use of Indeed scrapers which are bots meant for automating the process of data collection from the Indeed website. In this article, we would be providing you recommendations on some of the best Indeed scrapers if you want to make use of an already-made solution. Also included is how to develop a custom Indeed scraper if you have coding skills. 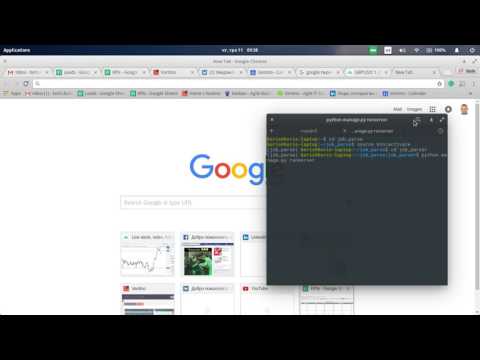 The term Indeed scraping is the process of using a bot to facilitate the scraping of the publicly available data on the Indeed website. The process of scraping Indeed using a web scraper is simple and easily understood in theory. The web scraper sends a web request in other to download the full webpage with the data of interest.

After the page has been downloaded, it uses a parser to comb through the page and parse out the required data which is then saved in a database or file to further use. Scraping has become the only available option since there is no free API you can use to collect data from the platform.

While scraping Indeed is easy in theory, it is not always easy if you are inexperienced and you need to scrap the site on a medium to large scale. Indeed is just like any other website that has valuable data publicly available – they do not support web scraping. For you to scrape data from Indeed, you will need to bypass its anti-spam system that has been set in place to discourage spammy behaviors which botting is considered one because of the too many requests it sends within a short period of time.

The most important anti-scraping technique Indeed uses to prevent scraping is IP tracking and blocking. You will also have to deal with cookie tracking and other methods and until you are able to bypass them, you won’t be able to scrape it.

Fortunately for us, there are already-made Indeed scrapers that have been developed that incorporate all the techniques for bypassing the anti-scraping systems. We would be providing you with recommendations on the best scrapers to use. Before doing that, we would be describing the process of developing your own custom scraper if you have coding skills.

How to Scrape Job Data from Indeed Using Python, Requests, and BeautifulSoup

From the title of the section, you can tell we would be using the Python programming language as it is the most popular language for developing web scrapers. Even if you are not a Python programmer, you can benefit from what would be discussed in this section.

One thing you will come to like about the Indeed website is that even though it makes use of JavaScript to make the site responsive, it does not make it compulsory for you to enable JavaScript. The advantage this has is that you can use legacy scraping libraries like Requests and BeautifulSoup as opposed to websites that require you to have JavaScript enabled.

The Requests library is an HTTP library for sending web requests – and receiving responses. What requests do is to help download a web page and then BeautifulSoup which is a parsing library is used for parse. Each programming language has libraries for doing these 2 – sending web requests and parsing – find out the libraries for your chosen programming language.

You can buy residential proxies from Bright Data or Smartproxy to use alongside your custom Indeed scraper. Other measures you need to follow include setting and rotating user agent string, setting delays between requests, and setting the referrer header.

Below is a code for scraping Indeed. The script is quite basic with only support for sending HTTP requests and parsing out the job title and description. Nothing more. Exceptions are not handled and there’s no support for bypassing anti-bot systems.

Best Indeed Scrapers in the Market

In this section of the article, we would be recommending some of the best already-made scrapers you can use to scrape job listings on Indeed.com. As you will find out, having a coding skill is no longer a requirement for scraping and most of the web scrapers that would be discussed below do not require you to write a single line of code.

Out of the 5 web scrapers that would be recommended, only one would be targeted specifically to developers – the rest are meant for regular Internet users.

If all you need to do is collect job listing data from Indeed then with Bright Data’s Data Collector, you will not even need to scrape. This is because the service has got an updated list of all of the jobs posted on Indeed. From Bright Data, you can get the entire job listing on Indeed or just a subset of the database either by location or by position, time, and even company, among others. One thing you will come to like about Data Collector is that it is available online as a web-based tool and quite easy to use even for first-time users.

While it works, it does have one major problem which is in the area of pricing. Currently, for you to access the Indeed database, you must be ready to pay at least $2500, which makes it expensive when compared to the other options available.

This web scraper has limited usage because of its target audience. Unlike the other described in the recommendation that is meant for all Internet users even for those without coding skills, this one requires you to know how to code as it is meant for the Apify platform which is a Node.JS platform for web automation.

So in essence, it is only meant for Node.JS developers that do not want to code a custom Indeed scraper from scratch. You can use the Indeed Scraper on Apify to scrape jobs posted on Indeed including detailed information about each of the jobs.

This Indeed scraper is built on top of the Apify SDK and you can use it both on the Apify platform as well as locally From this.

Instead, you are provided a point and click interface for identifying some of the data of interest and similar elements would automatically be identified. While Parsehub does have a paid plan for advanced features such as cloud scraping and scheduling scraping tasks. You can use it for free to scrape Parsehub if you do not want some of the advanced features that come with the paid subscription.

The Octoparse web scraper has been designed to be used by anybody that knows how to operate a computer. With this web scraper, you can convert a list of job listings available on the Indeed website into a spreadsheet with just a few clicks without any form of coding required at your end.

All you need to do is specify the URL the data of interest is, click on the target data when the page is done loading, and then run the web scraper to carry out the scraping task. Aside from the Indeed website, the Octoparse tool has been developed to deal with all kinds of websites including modern websites with AJAX, infinite scrolling, drop-down, and even login.

Last on our list of web scrapers for scraping Indeed is the ScrapeStorm web scraper. This web scraper has been designed for scraping all kinds of websites. It does have support for scraping job listing on Indeed and integrates all of the techniques to bypass the anti-scraping systems of the website.

One thing you will come to like about ScrapeStorm is that it is powered by an AI, giving it the ability to intelligently identify data of interest on a page without any manual operation required on your end. However, if the data of interest for you is not highlighted, you can make use of the point and click interface provided by the tool to identify the data you want to scrape.