Are you looking forward to scraping Expedia for travel fare, hotels, or even car hire prices? Then you are on the right page as we would be discussing how to get it done – if you are a developer – or provide you recommendations for already-made scrapers if you do not know how to code.

The Expedia website is one of the top destinations for travelers seeking to get travel fare information, rent a home for vacation, get car hires, and even discover what to do in new places they want to visit. It is simply an aggregator website that does much more than just gathering information as you can book flights and carry out your rentals on the site, among others. If you are interested in flight fare, hotel prices, car rental prices, and other travel-related data, then Expedia should be one of your target websites as it holds millions of travel-related data that you will be interested in.

Unfortunately, Expedia does not provide an API for extracting travel data from its website. If you must collect data from its website, you must do that on your own. And you will agree with me that manual data extraction from websites especially when the pages are many is practically impossible, tiring, and error-prone.

That is why you need to make use of web scrapers to automate the process of collecting data from Expedia pages. We would be recommending some of the best web scrapers you can use and also show you how to develop one yourself if you have coding skills. Before that, let take a look at what is Expedia scraping. 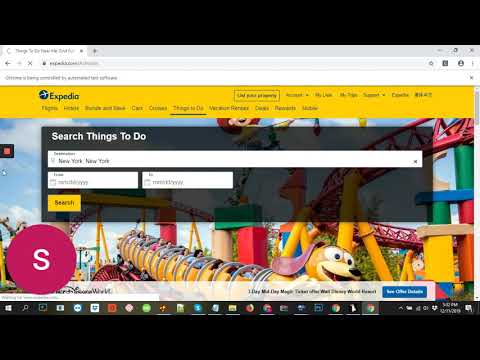 The act of web scraping is not allowed by Expedia as it adds to their server running cost and they also see it as data theft. However, in the face of the law, web scraping is legal provided the data you are scraping is publicly facing and not hidden behind passwords or other walls.

Even without Expedia supporting scraping, it has become a target of scraping by both small-scale web scrapers and large ones – even their competitors. For that reason, it has invested a lot of technology into setting up anti-scraping systems that make it difficult for you to scrape its content.

How to Scrape Expedia Using Python

For non-coders, you can move to the next section of the article to make a choice out of the recommended already-made web scrapers we provided there. This section is meant for coders looking to create a custom web scraper for scraping Expedia. You can use any Turing complete programming language to develop a web scraper for scraping Expedia but in this guide, we would be using Python as it is the popular programming language for bot development especially at a beginner. For scraping Expedia, you will need to use third-party libraries to speed up the process of development. We recommend you use Requests for sending HTTP requests and Beautifulsoup for data parsing.

Now to the anti-scraping bypassing part. As stated in the overview section above, you cannot scrape Expedia without getting blocked except you bypass the Expedia anti-spam system that comes with anti-scraping support. Unlike in the case of already-made scrapers that you will not need to worry about blocks, building a custom scraper would mean you integrating anti-block techniques else, you will be blocked after scraping from a few pages. This is because Expedia uses IP tracking to detect an unnatural number of requests coming from the same IP address within a short period of time.

To bypass this, you will need to make use of rotating proxies so your numerous requests won’t have the same IP footprint. We recommend you use residential proxies from Bright Data, Smartproxy, or Soax as they are undetectable to the Expedia anti-spam system. It is also important you rotate user agent, randomize timing between requests, and rotate other headers values so that you leave no clue for the anti-spam system to detect you are using a bot

The code below shows you how to code a simple Expedia scraper. Expedia is a pretty broad site that has a lot of data of interest. So for an MVP, the scraper only has support for scraping hotel data. You will need to provide it a list of hotel URLs available on the Expedia website for it to scrape their data and return the result as a response.

The code is quite basic and does not incorporate any anti-scraping bypass technique. It also does not handle exceptions and as such, if any occur, the script would just throw an exception and stop running.

Best Expedia Scraper in the Market

In this section of the article, we would be recommending some of the best Expedia scrapers in the market most of which do not require you to write a line of code which makes them perfect for non-coders wanting to scrape Expedia. It is important to know that these tools are paid with a few of them coming with free tier – but it pays to pay for the web scrapers you use as the best web scrapers would cost you money.

Data Collector is a web-based scraping tool provided by Bright Data, a leader in the proxy market. This web scraper has got support for scraping a good number of websites with Expedia as one of the supported websites. For Expedia, Data Collector provides two collectors – one for scraping car rental data and the other for scraping round-trip flight data.

Aside from these two already-made collectors, you can request a custom one if you have a different need. Data Collector is the easiest to use on this list when you consider the steps required. It requires no coding or you even using any visual scraping tool. The tool is paid and operates the pay-as-you-go model.

ScrapeStorm is one of the best web scrapers you can use for scraping Expedia. Unlike in the case of Bright Data that offers a specialized scraper for Expedia, ScrapeStorm is a general web scraping tool that has got support for all kinds of sites. It is built for the modern web which Expedia belongs to. ScrapeStorm also does not require you to write a single line of code. It is a visual scraping tool that comes with support for AI, giving it the ability to automatically identify important data points on a page. The team behind the development of ScrapeStorm is an ex-Google crawler team and as such, you do not need to worry about getting blocked.

If you do not have a budget for scraping and you need to scrape Expedia then ParseHub is the web scraper for you. This is because it does have a free tier you can use to scrape all of the travel data, hotel and flight deals  you want to scrape from Expedia. However, the true power of Parsehub is unleashed when you opt-in for their paid license as that comes with advanced features including performance increase and support for  cloud scraping and schedule scraping. ParseHub is easy to use and built for the modern web. Aside from Expedia, you can scrape all other websites on the Internet. All you need to do is make use of the point and click interface to identify important data of interest.

Webscraper.io seeks to make web scraping accessible to everyone and it provided a browser extension for making that a reality. The extension is free to use and is available only for Google Chrome. This web scraper is one of the best web scrapers for scraping the publicly available data from the Expedia website. It is configured using a point and clicks interface for identifying elements – no coding is required.

One thing you will come to like about this tool is that even though it is free, it comes with support for scraping all kinds of websites including dynamic websites – it execute Javascript, and handles ajax, among other things. If you want more features, you can opt-in for their cloud-based solution which is more robust compared to their Chrome extension.

Octoparse can help you quickly convert a full website into a spreadsheet. This web scraping tool is a general web scraping tool that you can use to scrape any website on the Internet including Expedia. You can use it to scrape hotel details, flight information, and even things you should do in places on Expedia.

Just like most of the other web scrapers described above, Octoparse is a visual scraping tool that offers you a point and clicks interface for scraping. It is a paid tool but provides new users 14 days free trial to test out the service. If you want a done-for-you service, then you can contact Octoparse as they have a professional scraping service.

As you can see from the above, some of the Expedia scrapers are even free. This means that you no longer have any valid reason why you have not been able to extract the data you want from Expedia. Expedia is a pretty big site and it is unlikely that your scraping activities would affect it performance but if you think you will be scraping on a big scale that would affect it, then it is advisable to be nice.