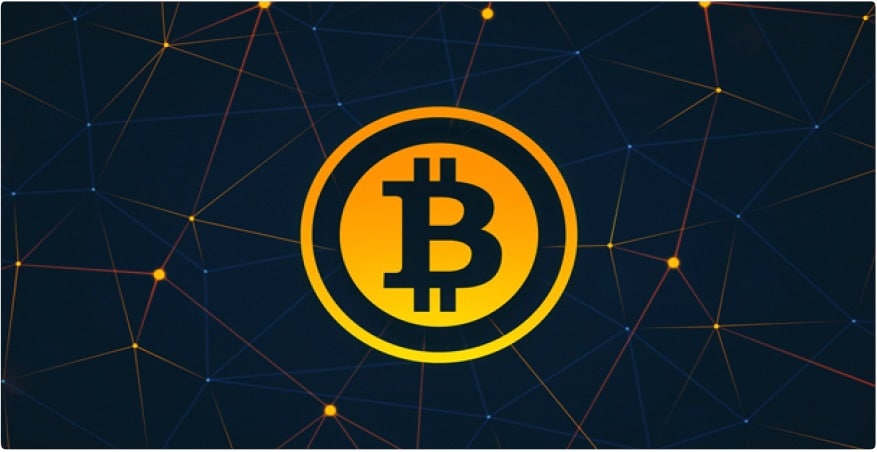 You like the dark corners of the internet, don’t you? The crawl spaces meant for those with late-night coding addictions, stacks of cash and silver bars hidden around the house, and accounts that aren’t remotely close to any nationally certified bank.

I get it. This world, in many ways, is roasting in a slow fire, and the crypto life is one of the more promising ways to survive and thrive in the potentially doomsday future.

You could also just be an economics major trying to make it big with the first successful global cryptocurrency to circle the earth.

Whatever your motivation for using bitcoin, you’re going to want more of it. It’s money, and all of us are into money in order to have more of it.

In general, I’m writing under the assumption that you have a clear idea of bitcoin, but for those that don’t here’s a very brief primer.

Bitcoin was created by Satoshi Nakamoto and is the first major implementation of concurrency, a concept that uses cryptography “to control the creation and transfer of money.” This takes those two regulating factors — transfer and creation — out of the government’s or bank’s control, making bitcoin secure and anonymous world currency.

It is digital and uses peer-to-peer technology for an immediate, completely private transfer. No third party needs to verify a transaction, and no transaction may be reversed.

The final major component to bitcoin is that the amount of it in the world is heavily regulated by CPUs and the community that participates in bitcoin, therefore there is almost no inflation.

This means that today, it’s very hard to come by bitcoin. This wasn’t true when the currency first debuted, but now that it’s popular it’s hard to get any in the traditional method, which I’ll get into below.

Due to the very strict amount of bitcoin on the market, you can guess that it’s quite diﬃcult to obtain. Tiny, tiny amounts of bitcoin are within your reach, but giant globs (i.e., a single bitcoin, or even 10) are going to take some serious time or a full-proof business plan.

A single bitcoin, at the time of writing, is worth $1000+ USD (and probably higher as you’re reading this). Harvesting it could be very worth your while, especially if the currency continues to rise.

Note that you’ll need a bitcoin wallet so that if you do earn bitcoin, it can be deposited somewhere. Coinbase is the “world’s leader” in that field at the moment.

I’ll break up the methods of earning more bitcoin with proxies into three main areas, and illustrate five key ways to make that bitcoin within those methods.

The first and original method of gaining bitcoin is to mine it. “Mine” here is supposed to make you think of donning a protective hat, a pick axe, and getting deep into the earth.

Except instead of the earth and a mine, you’re cracking a code that is auto-generated by computers. If you break this code (basically a puzzle), you are rewarded with bitcoin.

In the early days of bitcoin cracking these codes could conceivably be done by a single person, or small group. Successfully cracking the code also yielded in large, whole sums of bitcoin.

This is no longer the case.

While mining bitcoin is still the only method of getting new bitcoin into the market, it’s been put on an extremely slow release model.

Bitcoin is now so difficult to mine that it requires groups of people who have specialized computers all working toward the same puzzle. This will eventually crack the code, but in the meantime, you increase your energy bill, have to build or acquire that gear, and generally spend money on internet and proxies.

All of this is to say that while mining is the original form of earning more bitcoin, it’s not cost eﬃcient most of the time.

If for some reason you have the capital to set up a server warehouse of computers working 24/7 to harvest a bitcoin code all by yourself, it could result in money somewhere down the road, if bitcoin increases in value.

It’s a long-term plan, one that won’t result in a lot more bitcoin.

The second major way to earn more bitcoin is to do tasks for them. Sounds like work, right? Well, your goal is money in the form of bitcoin, so working for that bitcoin makes sense on the capitalism ideology front. 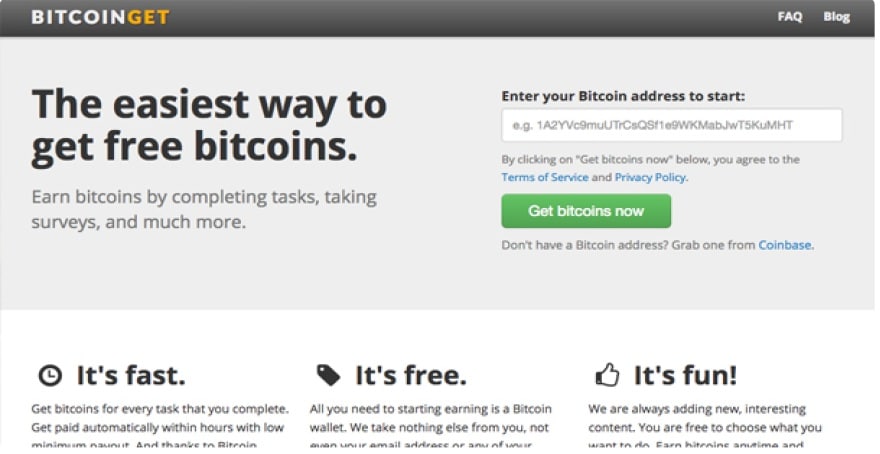 This is markedly diﬀerent from mining because it’s not about getting more bitcoin in the market — it’s about earning bitcoin that’s already out there.

Basically, companies have bitcoin and are willing to sell tiny, tiny fractions of it to you for performing certain tasks.

These tasks aren’t quite like getting your boss’ groceries or taking the pet to the vet.

If you search “bitcoin tasks” in Google you’ll find a number of sites that oﬀer bitcoin in very small amounts for a handful of tasks. Cointasker.com is one such site.

This is basically a value of your time for bitcoin. You can earn USD or any other regulated currency in these ways too, but in this case, you’ll get paid with bitcoin.

CoinTasker.com, at the time of writing, has over 36,000 members who’ve completed over a million tasks, all of which have totaled in 12.45-etc. bitcoin.

Yes, over 12 bitcoin for over a million microtasks.

While this doesn’t seem like a very good rate, you have to remember that this article is also about proxies. 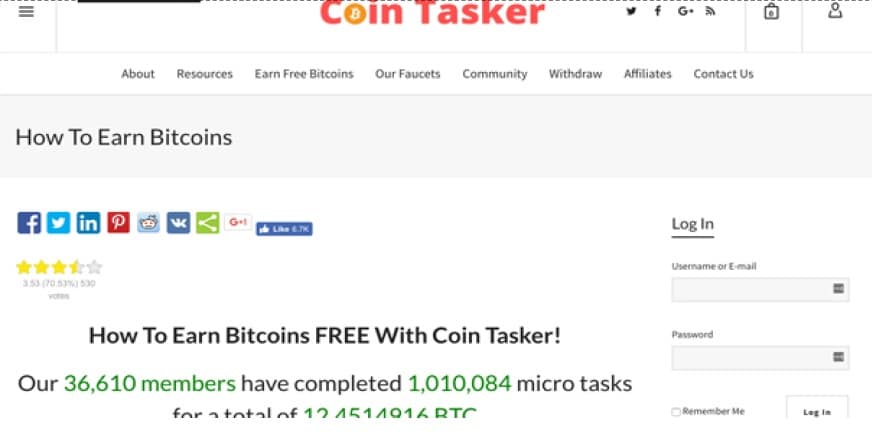 Proxies, when bought and employed correctly, can watch videos for you, can comment for you, can download things for you. This gets more complicated and potentially eats into your earnings, but if you want bitcoins by doing mundane tasks your best bet is to find tasks that proxies can perform while you’re at work, getting traditional money to pay for those proxies.

Note that you’ll need to register an account with any of these task services.

2. Use a Bitcoin Faucet

This is similar to mundane tasks, but a bit more specific. “Faucets” in the bitcoin world are websites that oﬀer a select amount (or predetermined range) of bitcoins to be given away during a certain time period.

Potential winners must perform specific tasks within that time frame in order to get the bitcoin. This typically oﬀer more bitcoin than the websites that allow to you to do tasks any time, because there is a limited factor involved. 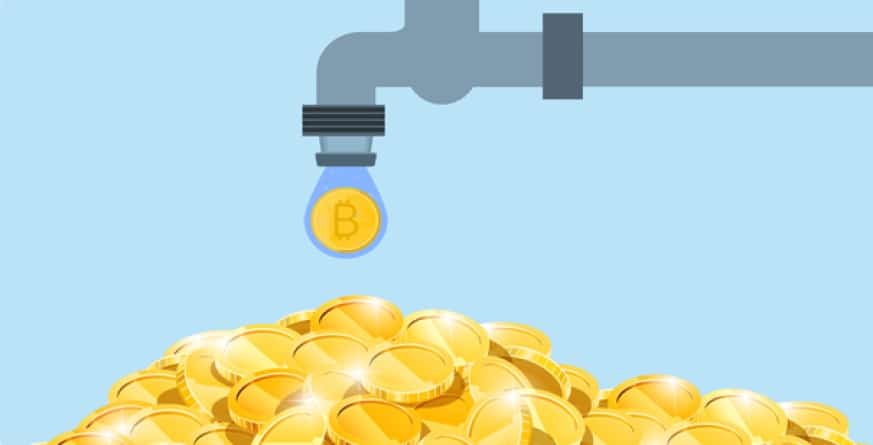 You still won’t receive a ton of bitcoin for performing tasks during a faucet, but if you’re on it you can continually reap the rewards.

Again, use proxies to do these tasks when possible. You can’t set them on 24/7 auto-pilot because faucets occur at unique times, so this will take more eﬀort on your end. Note that some faucets will ban you for using automated processes — it’s a tricky word, one you’ll have to navigate.

Lastly, many of these faucets require that you have an empty balance of bitcoin in order to win. This is supposed to prevent squatters from raking in all the bitcoin when others are trying to get a chance. This means that most people who faucet will reap the rewards, send their bitcoin to another account to achieve a zero balance, and then wait for the next faucet.

If you want to go the faucet route, Google “bitcoin faucets“. One of the issues with the bitcoin world is that sites like this don’t last for very long, so putting them in an article is not very eﬀective. Do your research and find a faucet that suits you well.

The beauty of bitcoin in 2016 is that it’s becoming more accepted in the mainstream. This means that you can conceivably charge people bitcoin instead of (or alongside) credit cards, cash, etc.

The sky’s technically the limit when it comes to this — charge bitcoin if you’re teaching yoga, selling tacos, training triathletes, etc. If you have the power to ask for money in a certain form, you are able to charge in bitcoin.

However, that isn’t going to work out most of the time, because a lot more people use credit cards and cash than bitcoin. Selling a taco for .003 bitcoin won’t go over great in the food truck line.

The best way to charge for bitcoin (and actually get it) is to sell services that bitcoin users are likely to use.

This lines up perfectly for you, a potential proxy seller. If you’re a business person but not a tech person, you can hire someone to help you set up and run a private proxy service.

If you’re both, do it all yourself. The second you start selling proxies you’ll want to post about it on Black Hat World — get your product out there.

Just make sure you accept bitcoin as payment. It wouldn’t be wise to only accept bitcoin, but if you’re really keen on making bitcoin you could make that your sales pitch: “Buy private proxies for bitcoin only!”

Also, you can sell the VPNs also, lots of  VPN services accept the bitcoin as the payment to protect their privacy.

This takes more work and requires you to have a great idea, but if you develop a tool like ScrapeBox you can charge bitcoin for it.

The people using such a tool (a scraper in this example) are more likely to have bitcoin, which means you’ll be right in your target audience.

Developing a useful tool that warrants payment is not easy, so this will require a good amount of thought and strategy on your part.

The reality is that charging bitcoin will mean you have something of value to oﬀer. You’ll see many small businesses that accept bitcoin today via their POS system or some other easy method. People don’t often pay in bitcoin, but when they do you make some for your collection.

As the popularity of bitcoin continues to rise you’ll see more major sites accepting bitcoin. You can always do the same. There are a ton of services that allow you to create platforms for accepting bitcoins.

Bitcoin is fascinating. The world’s first crypto-currency and a peer-to-peer system of exchange that is untraceable.

It has the potential to dominate the global market, but only if people are dedicated to it. If you’re interested in bitcoin, it’s best to start making it yesterday. So start now.