This is because unlike in the past that content is a problem and users can even get the same content shown to them twice, there is more than enough content to be displayed in the Newsfeed of Facebook users as according to a study, an average user has over 1500 content to be shown at every given time and if the user is very active and has a lot of engagement, this could rise to 15K.

So how do you stand out and what do you do to make sure users get to see your content. Besides making sure your content is of good quality, you also need to post at the right time to enjoy the maximum engagement. This is especially true now that organic content reach on Facebook is reducing. In this article, you will discover the best times to post on Facebook for maximum engagement. 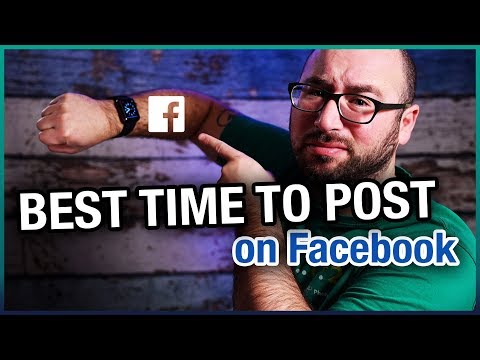 With all things remaining equal, there is a high correlation between posting time and engagement on Facebook. A large-scale study was carried out, looking at the engagement levels received by content and the period they were posted. On Facebook, the best time to post is around 9am.

The peak performance should be around 1am to 3pm. Content posted around 1am enjoys the most share while 3PM enjoys the most clicks. There is one thing you need to know about this – this is just generalized timing and the actual timing varies depending on the day of the week.

Sunday might not be a day for work and as such, you will expect it to be a day you will get the attention of your audience. In reality, while would be away from work — they would also be away from social media.

You can only get peak performance from 9AM to 10AM after which it keeps dropping till 2PM. From this time onward, you shouldn’t expect any serious level of engagement.

Facebook users seem to be night crawlers on Monday as you can enjoy some form of good engagement from around 1AM in the morning. However, the peak period for Monday is around 9AM to 11PM. Looking at the period, you can tell that users are already settled at work and then try to relax using Facebook.

It might interest you to know that unlike in the case of some other social media platforms, there is not much difference between Monday and Tuesday. The only difference is that unlike Monday that the peak period is just 2 hours, it extends to 4 hours, signaling a reduction in productivity level but good for engagement on Facebook. The peak period is between 9AM to 1PM.

When it comes to posting on Facebook, Wednesday is regarded as the best day for posting. This is because the engagement level remains high for a large part of the day.

You can begin to expect a high level of engagement from 9AM as with other days above. The engagement level remains high up to 5PM in the evening — making it the day with the longest engagement period.

After Wednesday, the next best day to post on Facebook in other to get a high level of engagement from your page followers is on Thursday.

However, the period varies a bit. Unlike in the case of Wednesday that you have a long period with high engagement, the peak of Facebook post engagement occurs around 11AM in the morning. However, the engagement level between 8AM to 4PM is considered moderate and acceptable for many.

Friday is another day with a considerable long period of high engagement if your content are interesting to your audience. The peak period is usually between 9AM to 1PM. The rest of the day would only provide you some level of engagement not at par with this peak period. However, once it’s 10PM on Friday, do not bother posting until after 1AM if you expect any form of engagement.

The worse day to post on Facebook is on Saturday as your audience wouldn’t be readily available to engage with your content. The only time you can see some form of engagement is between 8AM to 10AM. Even for this period, you might not be satisfied with the result and as such, save the important posts for the rest of the days of the week.

The above is the result gotten from a study that has been made public. This means that the same way you have access to it, others do have access to it and as such, trying to post at these stipulated times would result in competition in the Newsfeed that only some of your postings would get noticed.

For that reason, we do advise you only take this as a guide. If you already have a running page, then it is best you check out from the Insight page of the Facebook page the best days and times you enjoy the most engagement and then schedule your posting for these days and times – you will get better results than using the general time that does not take into consideration, your page and audience peculiarities.

When it comes to the success of your content, the timing for posting plays a great role as posting during the wrong times would not get the content the attention it deserves.

While you might want to post during the periods mentioned above, it is advisable you check the Insight of your page to ascertain if your own peak performance periods coincide with it if not, you will have to test and compare to know the best time for your own postings as the peculiarity of your page and audience could make your own best posting times different from the above.