Have you tripped off the 4chan anti-spam system on yourself, and your access to the forum is denied? Does your IP get Banned from 4chan for “Proxy/VPN Exit Node” on 4Chan? Do you want to know how tounblock 4chan without worry about the IP ban? Here we go!

4chan remains one of the most anonymous forums online. The site requires no registration, not even a pseudonym or username to post on its boards. People hardly connect because unless one reveals his identity through his post, there’s no way you send someone a message.

While they claim to have moderators, it is evident that the site has lots of relaxed rules, and many people get away with cyberbullying, peddling fake news and hoaxes, as well as trolling – it is the home of trolls and memes. For the smart people out there, 4chan can be really helpful.

Why you are banned on 4Chan?

However, if your access to the site is blocked, then you lose out, as you won’t be able to enjoy the benefits from the forum again with the same IP Address. They usually do not block people easily since most of the actions not allowed on many sites are allowed on 4chan. But if they consider you not fit to access their site, they will affect it to the later. They can be strict about it, and their anti-spam system is strong enough to detect proxies and bot traffic. They are anti-bot and do not allow bots on their site.

Does your IP get Banned from 4chan for “Proxy/VPN Exit Node” on 4Chan?

Yes, Even you're using paid VPN, like ExpressVPN and NordVPN, you may also get blocked by chan for they detect that you're using the VPN. You maybe want to know, why 4chan know you're using the Proxy/VPN? It's not a complex algorithm, For every IP address share some information to the web owners.

For 90% VPN service provider datacenter IP based VPN server, those datacenter VPNs are easily detected for websites like Ticket sites, Foot sites, These sites are strict to the IP address,

They will easily mark the datacenter IPs as the Bad IP or Botting IP! So they will blocked you, The 4Chan use the same algorithm also.

How to get unbanned from 4Chan.org

So, If you intend to use bots on the site, you have to be smart about it. And make sure you are using the most undetectable proxies you can lay your hands on. This article will provide you recommendations on the best VPN/proxies to use on 4chan either together with a bot or using them to unban 4chan and access it.

You already know why the datacenter IP gets banned, and many private VPN using the data center, So those VPNs do not go well with 4chan. So you have to use the Residential IP VPN to Unblock 4Chan.org, Hola is one of the best choices!

Hola VPN is a Freemium VPN service that works quite great on 4chan! They run a Peer-to-Peer network to operate their business!

For Free Plan, It does not really mean without any cost! You need to share your internet network and limit your download speed, It's the essence of p2p network.

For the Hola VPN Plus plan, Hola not share your internet network but also give you “Total Privacy” protect!

Hola VPN is available on most of the operating systems and as a browser extension, You can easily try their Free plan at first! It's the Largest Residential VPN network, More than 30+ million IPs in their pool!

This is lots of guys are would like to ask, for Tor network are a little similar to other p2p proxy networks, But Tor network can not work well on 4chan! Why?

The reason is, Tor network runs as a public p2p proxy network! The Tor exit nodes are can be easily detected by 4chan or other web servers, 4chan can easily know you're using Tor Browser to access their website, that's why lots of guys always get Captcha when using Tor network!

When it comes to proxy usage on 4chan, not all proxies/VPN work. 4chan is notorious for keeping tabs on datacenter IPs and blocking them, and as such, datacenter proxies!

Smartproxy is a premium residential proxy provider with over 10 million residential IPs in its pool. It has IPs in 195 countries around the world – and with support for city-specific proxies for 8 major cities around the globe. Smartproxy is priced based on consumable bandwidth but is one of the most pocket-friendly residential proxy providers despite being premium. With $75, you can get started with Smartproxy; this is not near the amount required by it equals. It is still as effective as they are. Smartproxy is our recommended provider for 4chan as it is affordable.

The team behind GeoSurf is an experienced one, and they have engineered their proxies to be undetectable. GeoSurf proxies have been used to access 4chan a good number of times, and it has proven to work – all the time, without any form of suspicion or detection. They are premium providers with over 2.5 million IPs in their residential IP pool. Currently, they have got proxies in all countries around the world and in over 1700 cities, making them even better at geo-targeting than Smartproxy. But as far as 4chan is concerned, geo-targeting for specific cities is not required. Unlike Smartproxy, GeoSurf is not pocket friendly.

Luminati is actually the best proxy provider in the market. It was one-time the largest proxy network in the world before being overtaken by Oxylabs, a proxy provider used only by big businesses because of their minimum monetary commitment. Still, Luminati is a force to reckoned with in the proxy industry. It has over 40 million residential IPs and has one of the best session control system that allows you 100 percent control over its timing. It has the widest coverage as it has proxies in all countries and in almost all cities around the world.

Luminati, just like the two above, is priced based on bandwidth usage. It is expensive, and as such, not many can afford their proxies.

When people want to unblock their access to sites, their first thought goes to proxy or VPN usage. But is using either of these always a solution? No. Sometimes, most bans are short-lived and are placed only on your IP Address. This means that if you give yourself some rest for a while and you try accessing the site, you will discover that the ban has been lifted. This method works only if the ban is temporary. 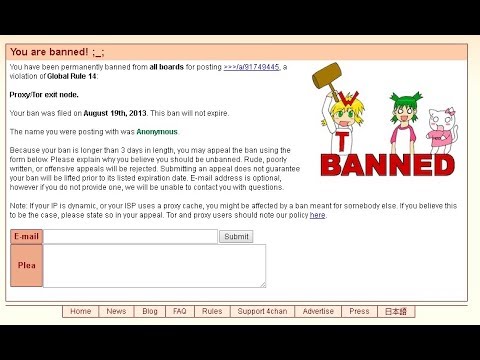 For permanent bans, you have to ditch that IP Address and use a new one. Fortunately, mobile devices are using dynamic IPs. What that means is that the IPs assigned to them are changed periodically or after their connection to the Internet is switched off. So turning OFF and ON your device might be all you need to get a new IP and continue accessing 4chan. When you turn OFF, wait for at least 5 minutes before you ON.

The OFF and ON method only work for devices with dynamically assigned IPs. If a device has a static IP, you just have to make use of a proxy or a VPN.

4chan created an avenue for trolls and bullies to remain anonymous – but you can violate their rule without them blocking, and when they do, they only thing they do is blacklisting your IP Address. If your IP Address has been blacklisted, you won’t be able to access it, boards. If this has happened to you, use either one of the proxies above or following the tips to unblock without proxies to unban 4chan.